Midway through the third quarter, it looked as though Game 2 of the Western Conference Finals was going to be another laugher.

The Los Angeles Lakers, holding a 16-point lead with 8:11 to go in the period, appeared to be emulating their Game 1 performance, containing the Denver Nuggets’ go-to actions and scoring with relative ease on the back of LeBron James (who scored his club’s first 12 points) and transition opportunities.

And then the Nuggets tweaked their offence, won key minutes against the Lakers’ small ball lineups, and found some help from unexpected places (hello, PJ Dozier!) to go on a 24–12 run to close the quarter and set up a spectacular, nail-biting finish.

What follows here are some of the key takeaways from the game, including, yes, that marquee Anthony Davis shot.

Get the best of our Raptors coverage and exclusives delivered directly to your inbox! 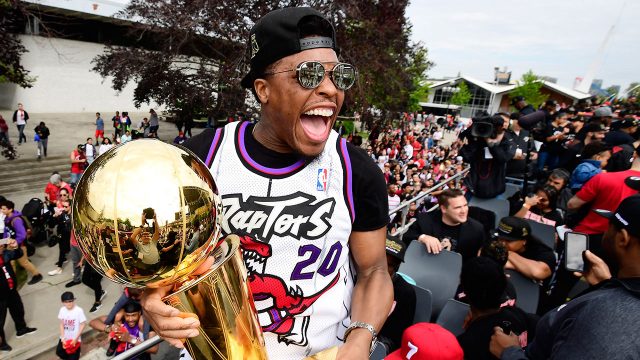 It was no secret coming into this series that the Jamal Murray–Nikola Jokic pick-and-roll was going to be difficult for the Lakers to defend, even with their surplus of (legitimately athletic) big men. And for the first half of this one, they did about as admirable a job as possible, having the big (whether that be Davis, JaVale McGee or Dwight Howard) drop back initially, ready to burst towards the arc if Jokic popped for a potential triple, while the guard fought through and over the ball screen to deter Murray pull-up threes and funnel him into the paint towards help.

Davis in particular showcased why he was voted All-Defensive First Team this year when involved in those actions, freely switching onto Murray if necessary and gobbling him up on drives or using his otherworldly athleticism to recover to Jokic to contest shots that typically would have been open.

Then, in the second half, the Nuggets not only adjusted well by aggressively forcing more switches than they had in the 24 minutes prior, they executed on those adjustments by attacking those switches, finding mismatches at every turn.

Suddenly, their offence roared back to life, with Jokic in particular finding himself pitted against smaller players who he could easily take advantage of.

On top of this, Denver’s two stars simply began doing what great players do, drilling tough shots against high quality defenders. Murray managed to squeeze past Davis a few times for some acrobatic layups, and Jokic hit some tough hooks and turnaround shots in the post against the opposing bigs.

In the end, of course, it wasn’t enough to get them across the finish line, but if they are able to continue to exploit the Lakers in the pick-and-roll going forward, Los Angeles is in for a tougher fight than they’ve had through the totality of two games.

Again, this really was a tale of two halves.

After the first 24 minutes, the Lakers were leading the points in the paint battle 24–12. By the time the game finished, the Nuggets wound up outscoring them 38–34.

It’s not so surprising that the Nuggets gave up so many points inside—during the regular season, they had the 10th-worst mark (64.1) for defended field goal percentage at the rim in the league. They simply don’t have any particularly formidable rim protectors, and while their defence has been marginally better throughout the playoffs, the athleticism of the Lakers was always going to be problematic.

In a microcosm of these issues, the Lakers have found a pet play in backdoor lobs, with a big man (or even James, who completed the play Sunday night, for example) appearing to come up towards the arc before quickly spinning back towards the baseline and rising for a lob from a guard (often Rajon Rondo) standing up top.

The Nuggets’ interior dominance, however, was far more unexpected, as the Lakers house multiple big men who are plus-defenders. In stark contrast to their opponents, Los Angeles was the sixth-best team in terms of defended field goal percentage at the rim (61.7) this past season.

But Jokic finding his touch inside, cutters making smart reads whenever doubles appeared, and Murray managing to weave and glide his way to the hoop out of the pick-and-roll despite some tight defence surrounding him allowed Denver to erase Los Angeles’ edge in that category completely.

There would seem to be a fair amount of things that the Nuggets can take away from this game, despite the loss, and be pleased with, and their interior play will be high on that list.

The Lakers bench was FIRED UP after Alex Caruso’s dunk.

Watch Game 2 of the @Lakers and @nuggets on Sportsnet! pic.twitter.com/Vyb3EufvCi

It looked as though Jokic was going to be stuck in the mud once again throughout the first half, finding it difficult to score with the Lakers doing a good job of keeping him matched up against an opposing big (Howard has been particularly good at getting beneath Jokic’s skin) to equal his size and strength, and guarding him in single coverage, thereby staying home on his teammates and lessening the chances of any potential cuts that would allow him to make use of his otherworldly passing.

In the latter half, though, that all changed, with Jokic getting loose as the Nuggets created more opportunities for him via switches, allowing him to match up with smaller players whom he could easily see over and score against. Once he’d scored once or twice in those scenarios, the Lakers’ resolve faltered, and they began to send double teams which he immediately capitalized upon, spraying pinpoint passes all across the half-court.

Once the fourth quarter came, he also simply began to nail extremely difficult looks he’d missed before and that the Lakers could only shrug at, including a massive three-pointer against a swiftly closing Davis to cut the lead to one point with 1:04 to play.

If it had been Jokic with the ball in his hands for the last shot of the game rather than Davis, the discussion right now could be about him instead (he finished with 30 points, six rebounds, nine assists and four steals). He’s as potent an offensive force as there is in the league today, and if he’s able to dictate the terms of Denver’s offensive possessions, this series could turn around in the blink of an eye.

The @Lakers take Game 2 over the Nuggets. pic.twitter.com/92LaPPI2ax

As great as Jokic was in this game, Davis seemed to have answers at every turn.

Not only was he exceptional with his individual and team defence (flying around the floor to contest shooters and switching whenever necessary without giving up an advantage), Davis found his offensive rhythm in the second half after a rough early start and closed out the game by scoring Los Angeles’s final 10 points.

And, oh yeah, he hit a pretty nifty buzzer-beating three, too.

That triple was only the second time Davis has hit a buzzer-beater in his career, and the first time he’s done so in the playoffs. It was also the first time a Lakers player had hit such a shot in the post-season since Metta World Peace back in 2010.

Davis’s performance (he finished with 31 points, nine rebounds and two blocks) was perhaps made even more enthralling by the fact that the vast majority of his buckets came either against Jokic or in response to him, generating a classic clash of superstar versus superstar. He worked Jokic in isolation all game long, taking him off the dribble to muscle his way to the rim or pulling up for mid-range jumpers and sticking them in his grill.

These are exactly the kinds of battles that elevate NBA basketball beyond any ordinary limitations, fabricating something ethereal that will stick in one’s mind forever after. And with at least two games remaining in this series, there’s plenty of room left for more.

ByteDance says it will not transfer algorithm to Oracle

ByteDance says it will not transfer algorithm to Oracle