Canadian Premier League’s Island Games: Everything you need to know


The 2020 Canadian Premier League season finally kicks off this Thursday after a months-long delay due to the COVID-19 pandemic.

All eight clubs have congregated in Charlottetown, P.E.I., to play the CPL Island Games that will ultimately crown a champion for 2020.

With a significant number of roster turnover, not to mention the absence of key international players due to travel restrictions and the addition of an expansion team, this promises to be a highly competitive tournament.

Here’s everything you need to know about the CPL Island Games.

All games will be played at the University of Prince Edward Island with the action kicking off on Thursday as Forge FC and Cavalry FC square off in a rematch of the 2019 final.

All eight clubs will play once against each other, with the four best-ranked teams advancing to a second round-robin phase.

Those four teams will face each other once in the second round. The top-two sides at the end of the phase will advance to a one-legged final to crown a champion. That champion also qualifies for the 2021 Concacaf League.

Additionally, all 276 participants at the Island Games tested negative for COVID-19 after the first round of testing on Monday.

New kids on the block

Expansion side Atletico Ottawa will be playing its inaugural season under extraordinary circumstances.

It may be tough for the league’s newcomers out of the gates, though. Ottawa only filled out its roster on Monday with the addition of six new players.

Ottawa’s first match at the Island Games will be against York9 FC on Aug. 15.

Who are the favourites?

This is the toughest question to answer on the eve of the Island Games.

Cavalry was the best side during the Spring and Fall seasons in 2019, but it lost key players in defender Joel Waterman, midfielder Julian Buscher and forward Dominique Malonga. International wingers Jose Escalante and Richard Luca are also unavailable for the tournament.

But coach Tommy Wheeldon Jr. still has a strong squad. The back line is very strong with Mason Trafford or Jonathan Wheeldon replacing the outgoing Waterman. Peruvian forward Jair Cordova, signed during the off-season, is a quality goal-scorer and could be a Golden Boot candidate with Sergio Camargo, Oliver Minatel or Nico Pasquotti feeding him the ball from the wings.

Don’t discredit Forge’s chances, either. CPL player of the year Tristan Borges moved on to greener pastures, although 21-year-old Paolo Sabak could be a ready-made replacement, as could Mo Babouli. Full-back Maxime Tissot was one of the other major signings and should bolster one of the top defences in the league from last season.

These were the two best teams in every major defensive statistic, and they still have the ability to outgun their opponents.

York9 FC, Forge’s Ontario rivals, might add some intrigue to these Island Games after a strong off-season. The likely midfield trio of Chris Mannella, Manuel Aparicio and Joseph Di Chiara is among the best in the CPL. Ryan Telfer was arguably York9’s best attacker last year, who will have more quality around him in Gabriel Vasconcelos and Michael Petrasso in the front three.

Those would be the three favourites, although Pacific FC – led by first-year coach Pa Modou Kah – have added experience to complement those talented youngsters at their disposal and will be a candidate to qualify for the second round robin. Same with HFX Wanderers, whose midfield might lead to a drastic improvement from 2019.

As previously mentioned, there are many players worth monitoring at the Island Games.

These names, however, were largely chosen based on potential to earn a call-up to the Canadian national team. There are foreign players who should be highlighted, though.

Here is one player to watch on every CPL club.

Campbell and FC Edmonton’s Easton Ongaro were two of the top young forwards last season. However, Campbell arguably has more room for growth.

Pacific FC is a much-improved side thanks to the off-season additions of winger Marco Bustos, midfielder Jamar Dixon and defender Thomas Meilleur-Giguere. Adding experience on top of the squad’s youthful energy makes Pacific one of the most intriguing teams.

Campbell stands to benefit the most from these new signings. Despite Pacific’s struggles in 2019, the 21-year-old was the team’s top scorer with 11 goals. With a stronger squad around him, the Burnaby, B.C., native could have a devastating impact on the proceedings.

The departure of Waterman was unfortunate for Cavalry FC, but it allows Zator to move into a more natural right-sided centre-back role for the team.

Considering there are spots up for grabs on the Canadian national team’s back line, a strong showing at the Island Games from Zator could lead to a recall from coach John Herdman. The 25-year-old was one of the best defenders in the CPL last season, and that led to his first senior call-up in November for Canada’s Concacaf Nations League match against the United States. 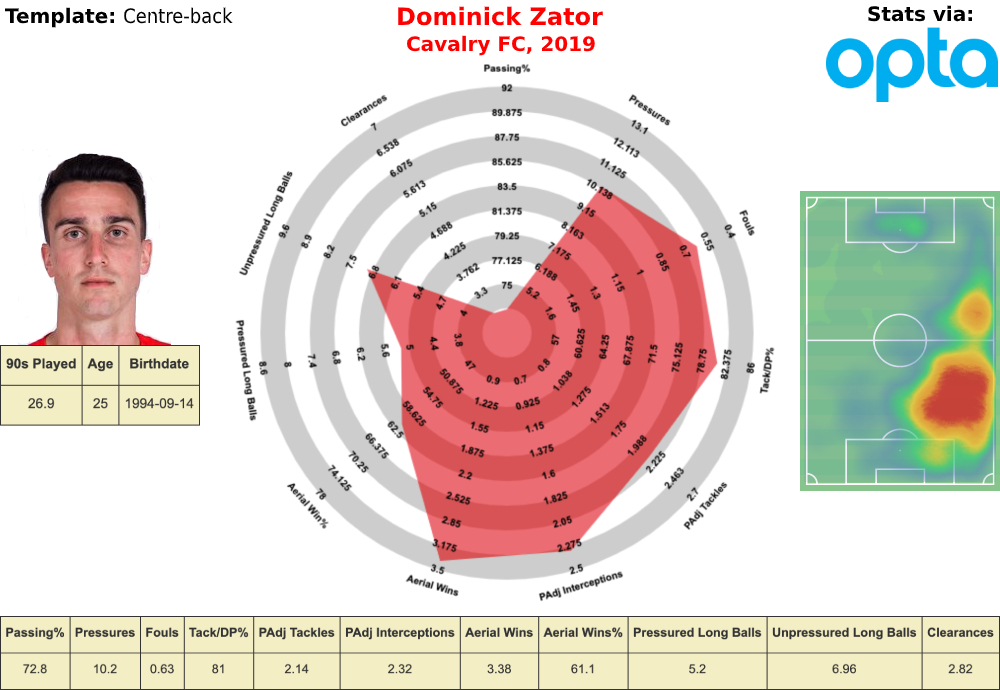 Tactically, Zator is comfortable playing higher up the pitch, as Cavalry utilizes a high press. Canada needs more tactically flexible defenders, so this is why he’s worth monitoring again.

Another defender who earned a Canada call-up after a brilliant season, Didic actually won a trial with the Vancouver Whitecaps before the 2020 MLS season. He ultimately returned to FC Edmonton, but it shows how high Didic’s stock has risen.

Didic is a unique centre-back who can physically dominate players while being surprisingly effective in possession, even under pressure from a high press. 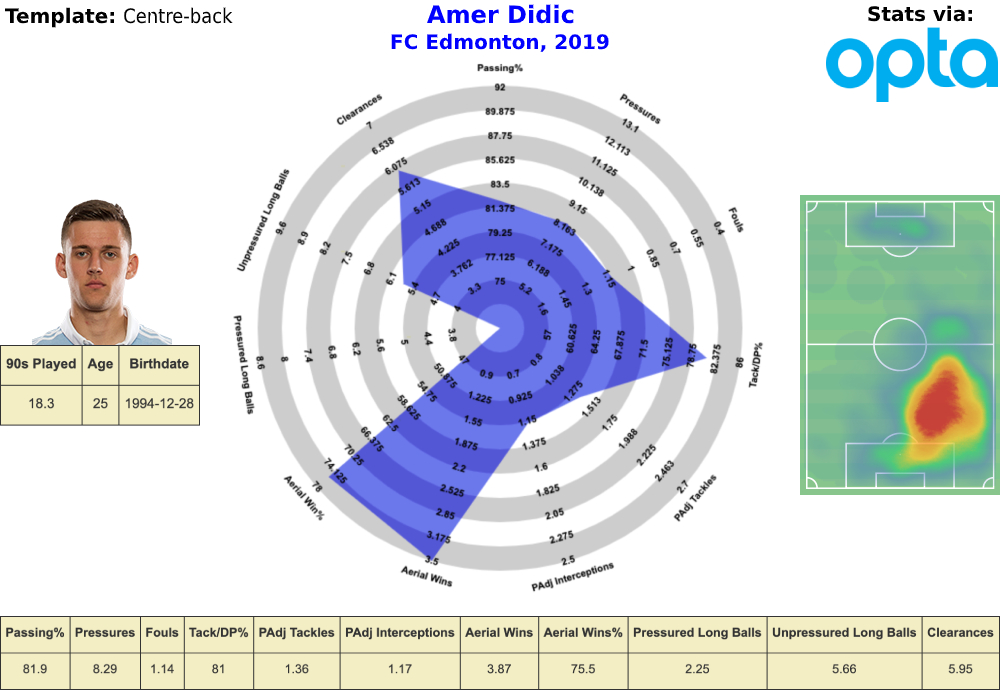 Didic will obviously be a key player for Edmonton’s defence, and another impressive showing at the Island Games might lead to a permanent move elsewhere.

There’s been a lot of activity in Winnipeg since the end of the 2019 campaign, yet the one player who’ll remain important to Valour FC’s hopes is local boy Carreiro.

The loss of top scorer Bustos to Pacific was a blow for Valour, although Carreiro can alleviate any concerns. He played all over the pitch last year, but may contribute in a consistent forward role in 2020.

Whether he’s an out-and-out winger with freedom to cut inside or a central playmaker, Carreiro was among the league leaders in key passes and deep completions (A pass – excluding crosses – that’s completed within 20 meters of the opponent’s goal) last season. Allowing him to play further up the pitch should lead to more goal contributions.

There are plenty of exciting Canadian full-backs in the CPL, from Kadin Chung to Kwame Awuah. But few were as consistently brilliant as York9 FC’s Abzi.

The 21-year-old was signed from the semi-professional Première Ligue de soccer du Québec (PLSQ) prior to the CPL’s inaugural season. He’s gone from semi-pro to one of the most promising full-backs in the Canadian player pool. 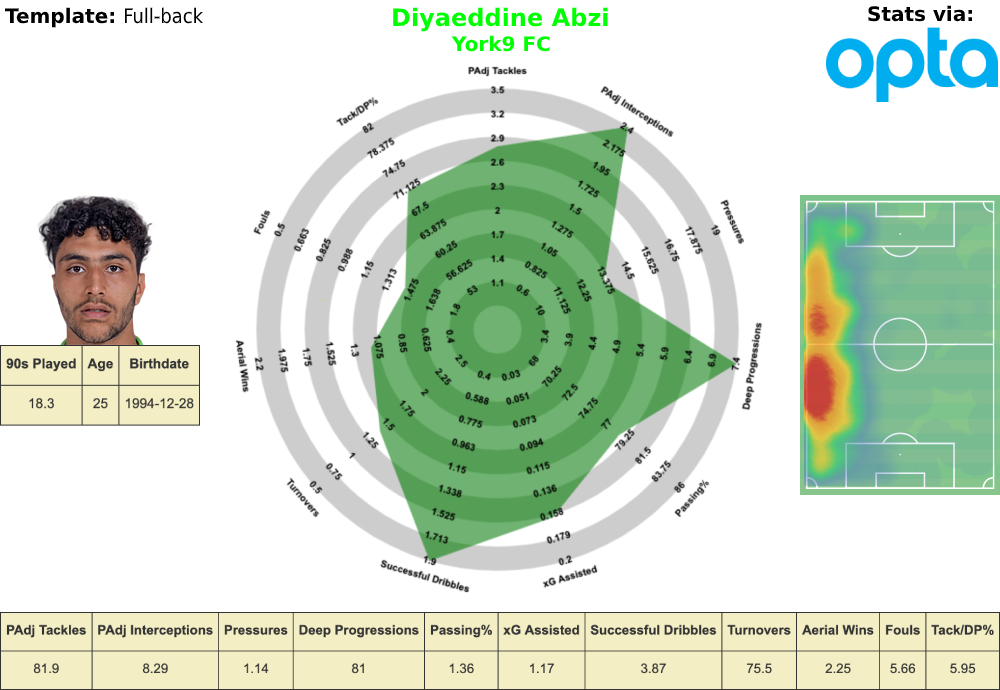 The attacking ability is immediately striking, but Abzi is equally brilliant defensively. It’s a good thing York9 handed the Moroccan-born defender a new contract, because he could easily attract lucrative offers for the club after the tournament finishes.

Sabak will essentially replace the CPL’s reigning player of the year in Borges, who was transferred to Belgian side OH Leuven in January.

It’s fitting, then, that Forge signed a Belgian to replace Borges.

Sabak has barely played over the last two years, but he can rekindle some of his potential with regular minutes in Canada, as seen with his predecessor.

Sabak, 21, is a shifty dribbler who likes to press the opposition off the ball. He can play on the right wing or behind the striker as well, which will appease coach Bobby Smyrniotis.

Vancouver Whitecaps loanee Facchineri could earn some valuable experience on loan at Atletico Ottawa over the next couple of months.

MDS: “This loan is a great opportunity for him to continue his development in a competitive atmosphere”

Facchineri was a key player for Canada on their road to the U-17 World Cup last fall, and this loan could be the next step needed for his development. The 18-year-old is dominant in the air, fairly calm in possession and reads the game decently well for a youngster. Regular minutes in a professional league should help him polish his game.

Don’t be surprised if HFX Wanderers are fighting for a spot in the second round robin at the Island Games. If that’s the case, Marshall will have played a crucial role.

The Jamaican is poised to be one of the most impactful international players in the CPL. Marshall has been capped 10 times by Jamaica by age 22, so this might be a coup of a signing for coach Stephen Hart.

This could be a huge signing for the Halifax side if confirmed; Marshall has been linked with a transfer to English clubs including Spurs, Liverpool and West Ham. https://t.co/Vy1Ll0p0p9 pic.twitter.com/Vo4kJR61gT

Marshall can play across the frontline and loves to dribble to create space, sometimes to a fault. Regardless, he should be exciting to watch.

Handmade Jibbitz for Crocs are popping up on Instagram

Handmade Jibbitz for Crocs are popping up on Instagram