by Admin
in Apps
0

Apple at its WWDC 2020 keynote address, which was an online affair thanks to the ongoing COVID-19 crisis, unveiled the next version of macOS – v10.16 ‘Big Sur’. Named after a mountainous region in coastal California, macOS 10.16 is said to be a significant redesign of the desktop operating system – its biggest since the introduction of OS X. It also features several improvements to in-house apps, including Safari. Amongst other changes, macOS Big Sur heralds the transition to Apple silicon-based Mac machines, the first of which will arrive later this year.

“macOS Big Sur is a major update that advances the legendary combination of the power of UNIX with the ease of use of the Mac, and delivers our biggest update to design in more than a decade,” said Craig Federighi, Apple’s senior vice president of Software Engineering. “With its modern and clean look, huge improvements to key apps including Safari, Messages, and Maps, and new privacy features, we think everyone is going to love the breakthrough experience that macOS Big Sur offers.”

macOS Big Sur will be made available to eligible Mac machines this fall as a free software upgrade. It will be available in its first developer beta today, while the first public beta will be released in July. Here’s a list of compatible Mac models that will support the new desktop OS:

Apple says Big Sur brings a major redesign to how macOS looks compared to Catalina (v10.15), and as mentioned, the company is calling it its biggest overhaul since the introduction of OS X back in 2001. Myriad changes have been made, from the shape of windows to various colours and transparencies. The Dock now features redesigned icons to unify their design language with the rest of the Apple ecosystem, while still retaining signature Mac characteristics.

The menu bar has also been revamped in macOS Big Sur, Apple says. Buttons and other controls will get hidden when not needed, and become visible when required. The company is also touting full-height sidebars and refreshed toolbars. System sounds have also been reimagined, but with the aim to retain classic tones. There will also be new symbols for toolbars, sidebars, and controls.

“The entire experience feels more focused, fresh, and familiar, reducing visual complexity and bringing users’ content front and centre,” Apple says on its blog post announcing the new operating system. Also new is the Control Center for Mac, and a revamped Notification Center with redesigned notifications to be more interactive and new widgets that can be easily resized.

Safari – Apple’s Web browser – has been redesigned for macOS 10.16 Big Sur, with one of the biggest changes coming to tabs. With the latest version of Safari for macOS, Apple says users will be able to see more tabs on screen, and easily identify tabs with favicons. Users will also get a preview of the tab if they hover their mouse over it. Safari also gets improved personalisation with a new start page featuring a customisable background image, a reading list, and iCloud Tabs. Built-in translate features for seven languages will also be available.

With Safari for Big Sur, Apple is also touting improved support for extensions (including a WebExtensions API to bring Chrome extensions to Safari), as well as a new place on the Mac App Store where users can view editorial recommendations and leaderboards. Safari also gets a new Privacy Report feature to show every cross-site tracker being blocked. There are also performance and power efficiency improvements in the latest Safari, Apple says. Users will also be able to import passwords and settings from Chrome, while there is a new password monitoring system.

As for Messages on macOS Big Sur, Apple has added features like message pinning, a new and improved search function, message effects, customisable Memoji stickers, a new photo picker, mentions, as well as new group messaging features including inline replies and group photos.
Another native app that sees a major rework is Maps on macOS Big Sur, and it brings new planning tools such as Guides, 360-degree perspectives in Look Around, as well as the ability to route maps on the Mac and send them to the iPhone when users want. 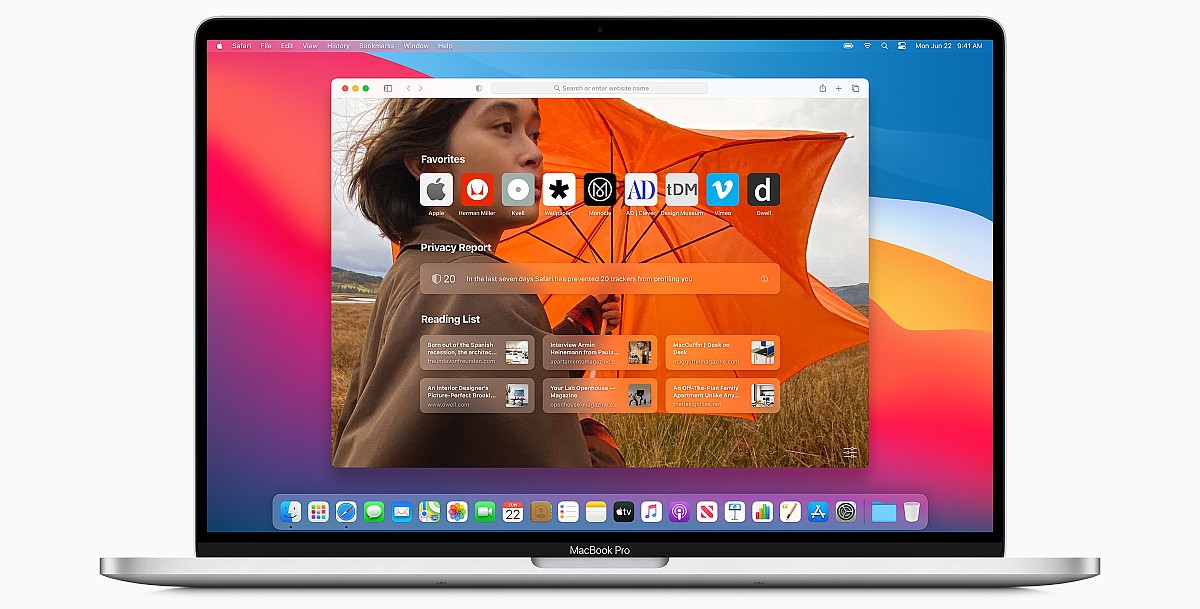 macOS Big Sur will get a revamped Safari browser

Apple announced the first Mac machines running on Apple-designed custom chips, anticipated to be based on the ARM architecture, will launch at the end of 2020. At the keynote address, it showcased a Mac machine running the Apple Development Platform on an Apple A12Z Bionic SoC, last used in 2020 iPad Pro series. As you’d imagine, apart from new hardware, the transition to Apple silicon from Intel chips will also entail some reworking of apps.

To that end, Apple says it has already reworked its popular in-house apps to work on Apple silicon-based Mac machines, optimising them. It also detailed that with Xcode 12 framework and Universal 2 app binaries, app developers will be able recompile their Intel-based Mac apps to work with Apple silicon in a “matter of days”. A Universal App Quick Start Program, applications for which open today, will allow developers build and test Universal 2 apps.

Another notable announcement was the use of Rosetta 2 translation tech to allow users to run existing Mac apps on Apple silicon-based machines without any modifications. One of the biggest reveals for macOS Big Sur was the ability to run iOS and iPadOS apps on macOS, without any modifications. New virtualisation tech will also make its way to the new version of macOS to allow users to easily run Linux on their Mac machines.

Finally, similar to what iOS 14 will introduce to the App Store, macOS Big Sur brings some privacy changes to the Mac App Store, including a summary of the privacy practices of each app – data that’s self-reported by the developers.