With the 2019-20 NHL season in limbo, one of the biggest questions right now is what happens to unrestricted free agents? With no confirmation of this season being over yet, and no confirmed date to start the next season, there’s more uncertainty than ever heading into a summer of collective bargaining agreements.

With the situation up in the air, how will the market react to solid players entering free agency at the most confounding and uncertain position in the sport: goaltending?

Senior Writer Ryan Dixon and NHL Editor Rory Boylen always give it 110%, but never rely on clichés when it comes to podcasting. Instead, they use a mix of facts, fun and a varied group of hockey voices to cover Canada’s most beloved game. 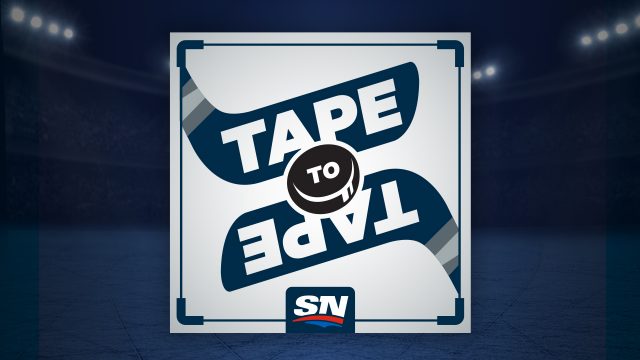 A lot can change between now and July 1, but at the moment there are some heavy hitters who could be available to teams looking to fill their net with a starting goaltender. Three of the biggest names out there are Braden Holtby, Jacob Markstrom and Robin Lehner.

Lehner and Markstrom are coming off excellent seasons, while Holtby greatly struggled, but easily has the highest pedigree of the trio. In order to get some idea how these players are trending and whether they’re worth the risk of a long-term contract in an uncertain time, let’s look back over multiple seasons of their careers and analyze their save percentage by shot location.

Raw numbers tell us something, but let’s remember that the game has changed over the last few years, and expected save percentages have dropped considerably. So, in order to control for that, let’s look at each goaltender’s save percentage by shot location relative to the expected save percentage of that season. That should give us a better idea of who is trending up or down, and control somewhat for the team structure that each play behind. 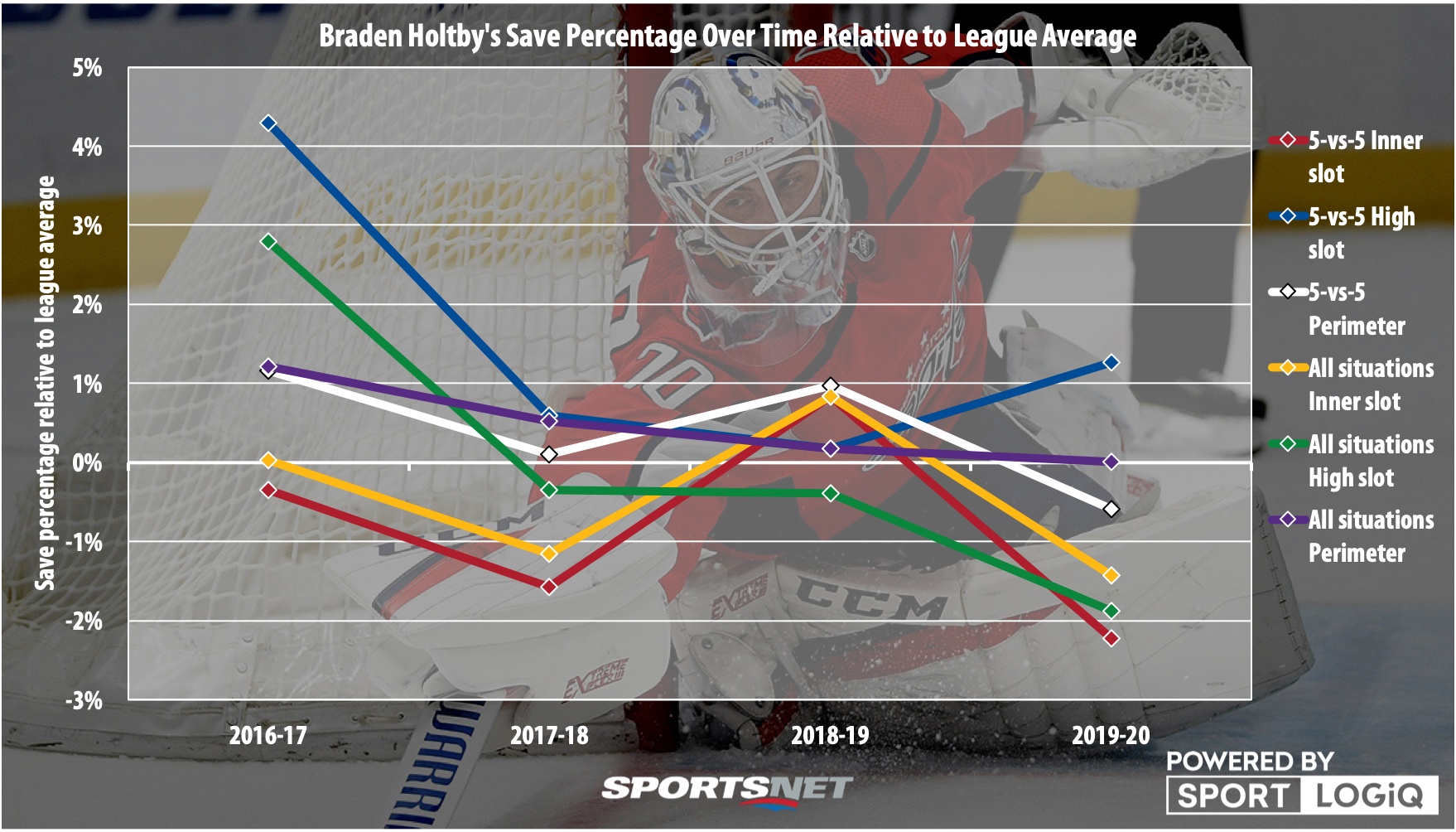 Following the year Holtby won the Vezina in 2015-16, things haven’t been so rosy for the Capitals’ longtime starting goaltender. His 2016-17 season was pretty stellar, with Holtby saving shots from the high slot more than four percentage points better than an average goaltender at 5-vs-5. His play was strong overall as his only weakness was in the inner slot, where the Caps didn’t give up much anyway.

Since then it’s been a very bumpy road for Holtby in the regular season. The playoffs are a different story of course, as he’s struggled with consistency while his grasp on the starting job in Washington seems to get looser by the year.

The 2018-19 season was a bigger rebound season than most people realized, with the Capitals struggling defensively in the regular season and Holtby above average everywhere except for the high slot on special teams, which dragged his overall save percentage from the high slot slightly below league average.

This season is a bit all over the place, as he’s been strong from the high slot at even strength and absolutely lit up there on special teams. From the inner slot he’s been below average again, posting the worst numbers of his career so far.

At 30 years old, Holtby likely isn’t done. It’s too early to through in the towel on him overall, but one thing that stands out to me a little bit with him is that he has seen his save percentage relative to the rest of the league on perimeter shots overall drop in each of the last three seasons.

Generally speaking there isn’t a lot of variance in perimeter save percentage — goalies stop about 97 per cent of those shots. Holtby has gone from nearly unbeatable from there to simply ordinary, and taken along with his other metrics being erratic and trending down overall, I’d be worried about giving him a long-term deal. 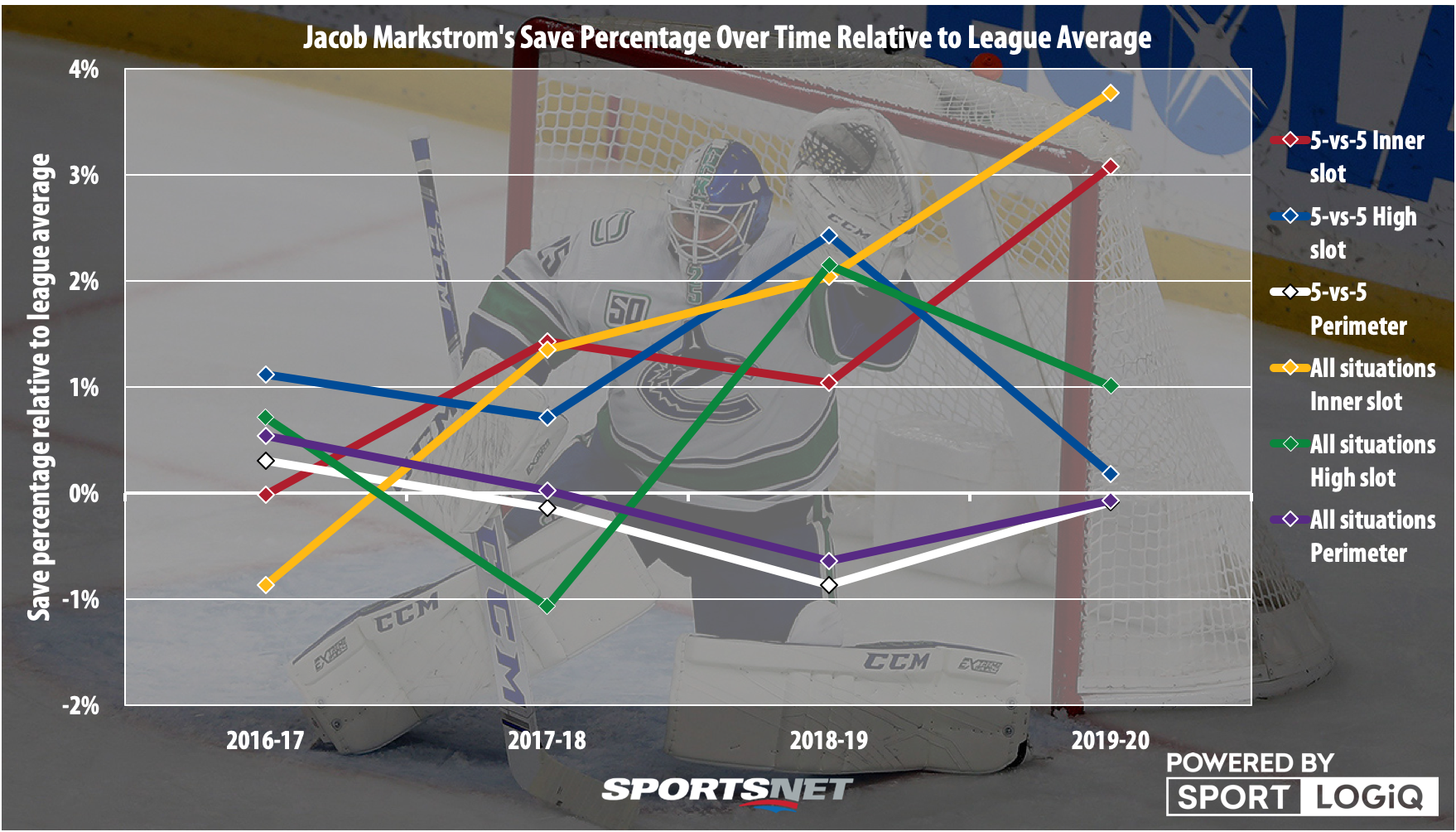 The Vancouver Canucks’ MVP before getting hurt near the end of February, Markstrom has quietly been very strong for each of the last four seasons, with his ability to stop high-danger or inner-slot shots skyrocketing over that time.

This season he has seen his efficiency in the high slot drop, which I’m guessing has something to do with the Canucks’ porous defence off the rush, and he’s never been particularly special on perimeter shots, but overall he’s been exceptional.

A .918 save percentage may not seem that impressive in a league where the average save percentage is .910, but Markstrom faces much tougher shots on average than most goalies do, and he’s now been consistently strong as a starting goaltender for three seasons on a rebuilding team.

The generally poor results from the perimeter can lead to some soft goals now and then, but on the tougher shots that make or break games, he’s been one of the better goaltenders in the league for a while.

Also 30 years old, it’s always a huge risk to go long-term on any player entering the back half of their career, but considering Markstrom seems to have just hit his stride as a starting goaltender recently, he may have more gas in the tank than normal. I still don’t think anything over five years is advisable, but Markstrom has earned some level of term. 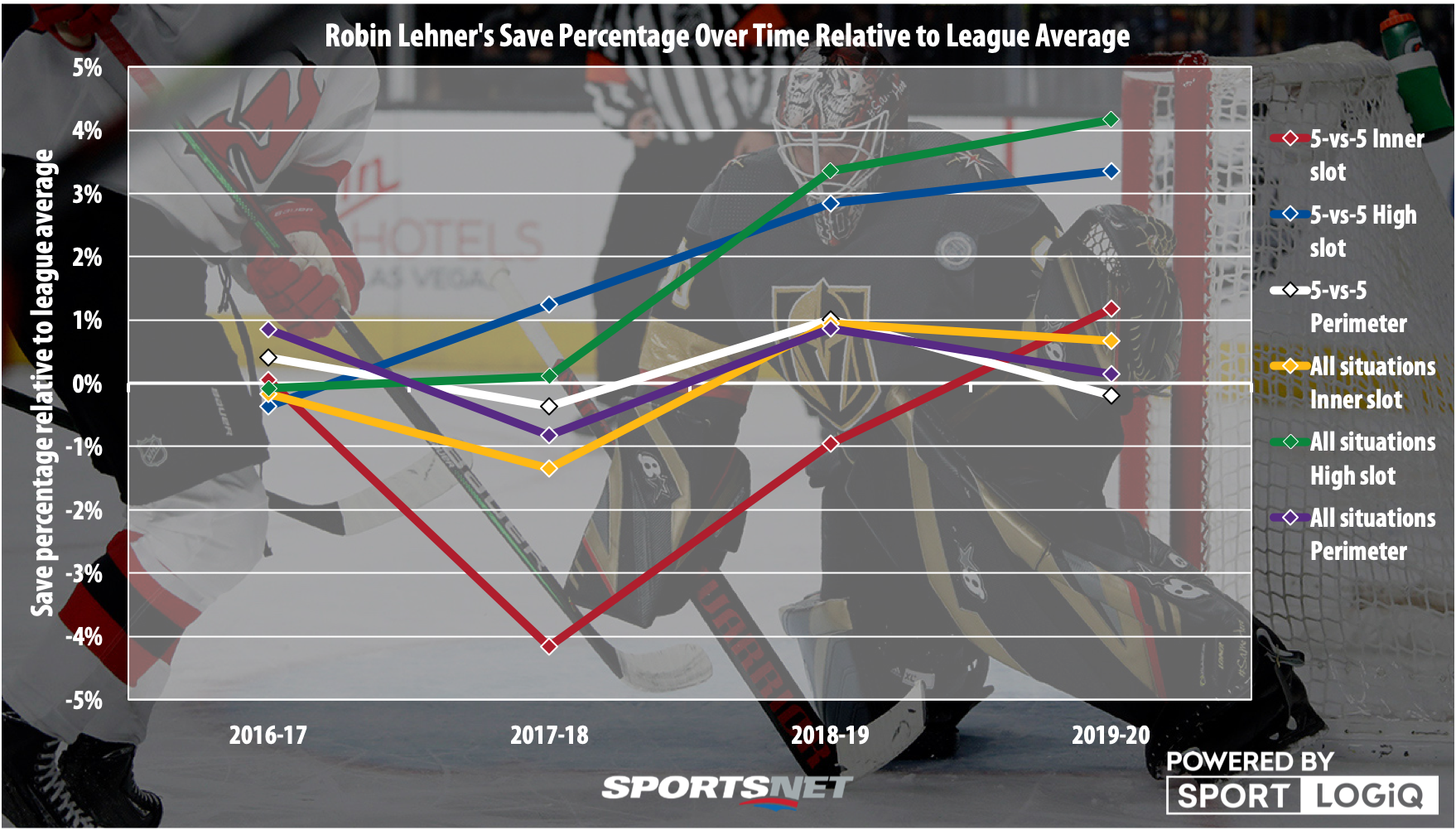 There’s a pretty clear arc going on with Robin Lehner, who was decent but above average, then inconsistent while dealing with personal issues, then stellar since recovering. I expected he would drop off considerably this season with the Blackhawks being one of the worst defensive teams in the league the last several years, but his performance is actually better overall.

While Lehner’s save percentage has dropped off from his lofty .930 he recorded on the defensively sound Islanders, he’s maintained a .920 this season despite facing drastically tougher shots by simply being much better in the slot, high and low.

His save percentage on perimeter shots has dropped a bit, but not below average overall, and not enough to eliminate the huge improvement he’s made in other areas.

At 28 years old, Lehner is the goaltender that shows the clearest trajectory of positive performance, and should be the one who gets the most money and term. And yet that was probably true last year as well, and he ended up signing with a non-playoff team for a single season.

Maybe NHL GMs wanted to see Lehner prove it again, but he’s clearly done so, and he should have as much leverage in free agency as a goalie can have.