TORONTO – Like all respectable roller-coaster riders, the Toronto Maple Leafs had their photograph snapped at the bottom of a frightening plunge.

The hockey players gathered and posed at centre ice Monday afternoon, cheesing for the annual team photo, clueless if 2019-20 will be one to regret or cherish.

Head coach Sheldon Keefe addressed the group after the flash’s burst and the shutter’s click.

“It’s one thing to be in a picture, but the reason why you take a picture is to have a memory,” he told them.

“We want to be able to look back at our team picture and be proud of our group and remember the individuals, applauding the efforts that many people brought.”

Considering the landscape and the opponents, those efforts must be ratcheted up by about 44 notches over the next five days, as the Leafs draw the mighty Tampa Bay Lightning Tuesday, the wild-card charging Nashville Predators Thursday, and visit Boston for a showdown against the NHL’s No. 1 outfit Saturday.

“We’ve struggled with playing teams below us in the standings,” Jason Spezza said. “That’s something we won’t have to worry about this week.”

In times of nervousness, we resort to humour.

How the Maple Leafs respond to their 0-fer in California — and the Florida Panthers’ creep to within a single point of supplanting them in a playoff position — will filter the feelings associated with Monday’s photograph.

Keefe said his players are “confused themselves” as to why they’ve run so hot and cold, but they’ve agreed that their competitiveness needs a boost.

“I’m a bad scout,” said Morgan Rielly, who’s been stuck watching the ride from afar. “I can’t really put my finger on it, to be honest with you, but I think that a big part of it is work ethic.”

Even if Rielly is admittedly nervous to come back in such a critical game after eight weeks on the shelf, Tuesday’s return of Toronto’s No. 1 defenceman should provide a jolt. Rielly’s feel for the puck may be rusty, but his effort level won’t be an issue.

“When there was so much star power on the back end there, he kinda was just that guy that did everything right for you. I like his game. I like his vision. I really like his compete. I think he’s an intangible kind of defenceman that can do everything for you. He’s a guy you want to have in your locker room.”

As the Leafs welcome a difference-maker into the room, Tampa, already playing sans captain Steven Stamkos, must persevere without another one.

Perennial Norris candidate Victor Hedman (lower body) participated in the morning skate but will not dress.

“He’s one of the straws that stirs the drink,” Cooper said. “Victor Hedman can dictate a game. So, when you’re taking out 25, 26 minutes a night and [someone who plays on] all your special teams, a driving force of what helps your team, it has an effect.”

Home of the Maple Leafs

Stream 56 Maple Leafs games this season with Sportsnet NOW. Get over 500 NHL games, blackout-free, including Hockey Night in Canada, all outdoor games, the All-Star Game, 2020 Stanley Cup Playoffs and more. 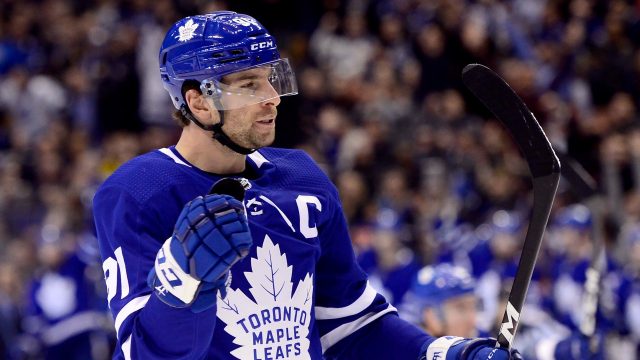 In the home room, Keefe hopes a juggling of his top six will also have an effect.

For the first time since before Christmas, Auston Matthews and Mitch Marner will be pulled apart. Matthews and Hyman will be joined by the red-hot William Nylander, the most dangerous forward during last week’s lull. Marner gets reunited with John Tavares, and Kasperi Kapanen gets a promotion to their left side.

Toronto is rubbing any two sticks together, scrambling for a spark.

Over the past two days, speaking from a league-mandating, sanitized podium, multiple players have mentioned the scant number of games remaining (13) and the need to inject each one with post-season intensity.

“It’s a difficult team to get a read on,” Zach Hyman said. “There are nights we play extremely well and we can beat anybody, and then there are nights where we don’t live up to expectations.”

Guessing which night we’re in for Tuesday is about as easy as predicting how that team photo will age.

Yet for all the justified criticism and doubt shaded their way, the individuals in that frame still control their own destiny.

“What a picture represents are the memories,” Keefe said, “and we have an opportunity here to make the season a memorable one.”